Carlota Guerrero is a spanish artist who lives in Barcelona and works around the world. 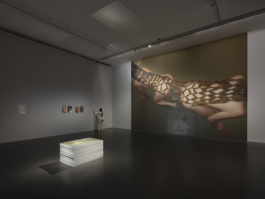 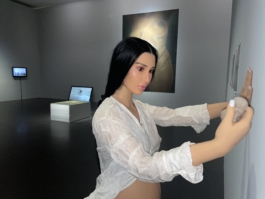 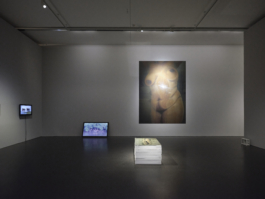 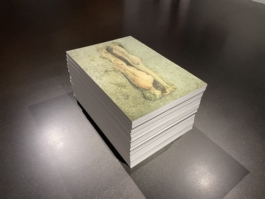 An apparent visitor stands serenely in a corner of the exhibition room. She has her back turned to the rest of the viewers and looks down towards a small figurine she holds with one of her hands.

The room presents a thematic showcase of the artist Carlota Guerrero’s photographic and video works, most of them never-before-seen. Her signature is present in the utopian situations she creates through the use of an exclusive female presence, as we navigate the carefully choreographed mise-en-scenes, into a sometimes discomforting purview.

Titled Sofia Willendorf, the installation takes the historian and anthropologist LeRoy McDermott and Catherine Hodge's thesis from their article Decolonizing Gender: Female Vision in the Upper Paleolithic (1996) as the starting point. In the text, the authors criticize the way the first images of human bodies, the Venus figurines, have generally been interpreted as sex objects made from a male point of view. Instead, they argue, they were made by women and for women as a form of self-representation. Following this, the apparent distortions of the anatomy of the figurines become apt renderings if we consider the body as seen by a woman, presumably pregnant, looking down on herself.

Regardless of the veracity of the argument, which seems perfectly logical and credible the question remains; why did it take so long to consider the logical possibility that a female point of view was involved?

Sofia Willendorf gives voice to that pregnant woman in the contemporary context, where past and present archetypes are confronted under the veil of an imposed male gaze the artist tries to subvert. A certain discomfort emerges while staring at the duo, ironically separated by 30,000 years gap. Originally purchased as a sex doll manufactured in China, the contemporary visitor cheerlessly exemplifies both the prevalence and the profound influence of the patriarchy.

Through her work, Guerrero questions the effects of the omnipresent male gaze and claims for the exploration and realisation of the female point of view. In this vein, her body of work might be understood as an endless collection of self-portraits because, as the artist herself states, she photographs women in order to understand her own condition. Indeed, one can observe certain similarities between the artist process and the European Upper Paleolithic women who, in the absence of mirrors, supposedly sculpted their bodies in stone in an attempt to bolster their capacity for self-representation.

In this context, Luce Irigaray reminds us how our conception of the feminine within a patriarchal society is neither configured by what women are nor what have been, but rather by what men have historically constructed for them. Particularly in the patriarchal western context, symbolic representations of women and men have historically served as catalysts of gender metaphors, and thus, affected the potential functions and roles of one and all.

Among all these symbols, the religious and mythological appear specially relevant due to their capacity of representing a power that human beings have interpreted as divine and unquestionable. Along the historical process of structuring the current society, the dissemination of an androcentric symbology that attributed the creative power of life to a male God, together with the progressive destruction of female symbols linked to power, has had a brutal impact on the shaping of our common imaginary.

Carlota Guerrero aims to fill this imagination gap by continuously generating a new feminist symbology through the creation of contemporary myths, vestiges, and fictional rituals that characterize her new pieces. In these, the mentioned lack of symbolic female referents meets with the current hyper-medialised times, where Pop (in capital letters) is used as a channel for the spiritual and the divine. Certainly, the selection of photographs and videos showcases a range of mostly unreleased works that perform as windows to a more raw matriarchal utopia. As paths through which the female millenary wound might be healed, Guerrero’™s oeuvre brings the utopia closer to reality by presenting a series of poetically fabricated myths of a female past that has not existed, but makes space for the future.

WHO AM I / I AM @ Staatsgalerie Stuttgart